It’s been quite some time since the last time I posted on this blog. A lot of things have changed since then. One in particular, is my working for Schwans Consumer Brands.. better known as Red Baron. I spent 5 years working for them, and quite honestly I liked it. I liked the fact that I was able to go into different grocery stores and observe their day-to-day operations. I also went from working daytime hours to working overnights throwing freight.. or rather stocking shelves. It’s really all the same. I’ve also had the opportunity to go into stores that are closing, or on the verge of closing. One store I recently had the chance to go into, was the Safeway store located at 67th Avenue and Peoria. Safeway #3154. It was a long time fixture in that area of Peoria. In fact the wife and I shopped there when we had our first apartment nearby over 20 years ago. There was also a time.. Sometime in the late nineties, when it (ironically) closed due to poor sales. It probably stayed dormant for a couple of years, until sales and the population picked up in the area. Well that wasn’t the case this time. This Safeway, like several others before in the Phoenix area, was closing…permanently. It this all happened by chance.. my going into this Safeway that is. I had called my long time friend John…a former coworker, who happened to be at the store greeting and talking to union members who were being relocated. Since it was on my way home, I figured I would stop by for a visit with John, and see what was going on there at the store. Luckily I had brought along my one useless android phone that takes decent pictures. After arriving, I asked one of the associates where I could find John. She directed me to the break room. Looking around, the store was empty.. of product that is. The aisles were all there…except they were all roped off with yellow caution tape. The only exception being three small aisles crammed with what little product was left in the store. To be honest, the whole thing was quite sad to look at. When I walked in the break room, my friend John was there with one other person. As soon as I looked at the other person I knew immediately who it was. It was an old Fry’s associate of mine named Mark Kindler. Not only had I not seen or worked with him over 21 years, but he also recognized me immediately. It was really weird. After some catching up, I had mentioned to him about my blog and especially my interest in things “abandoned”. He asked me “Do you want to look around?” “Absolutely” I replied. We walked out into the store and stepped beyond the caution tape. I made some observations, had some more conversation with Mark, took some pictures, and left. I’ll be honest, there isn’t anything very remarkable about a half empty grocery store that’s on its last legs. Visually or otherwise. It wasn’t one you could call pleasing to the eye by any means. It was definitely stuck in the 1990’s..or earlier. Dated. To think of how many people probably shopped here over the years. I guess it probably had a life of it’s own..in essence. I think every building does. For me though, there’s something special about it..something to document..to preserve. More so because I’m in this industry. A new chain called Haggen will probably occupy this space in a few months, as an agreement having to do with locations was struck between them, Albertsons and Safeway. I guess we’ll see… 🙂 I hope you enjoy…and please leave comments. 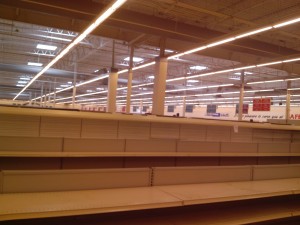 shelves in the Bakery dept w the “cheese wall” in the distance..the higher row of shelves…

This was where all of the bread was kept..so empty..

A view from inside the Bakery Dept looking out to the store.. 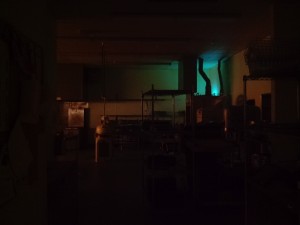 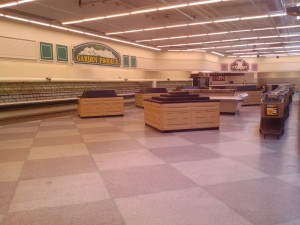 ..aisles w caution tape from the backside, off limits to the general public..

This is a view from the back aisle looking east toward the Bakery and Pharmacy. If you look closely, You’ll see a forklift ready to dismantle all of the gondolas and signs thanking customers for their patronage and directing them to the next nearest Safeway. This area was also off limits to the general public..

..looking west across the front end of the store..

..another view of the front end..this time of the empty freezer cases…

..this is where the ice machines were kept… 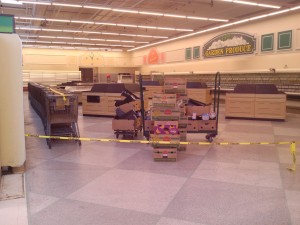 The Produce Dept looking toward the back of the store…

..part of the Produce and the Floral Dept

..A shot of the front of the store with the cautionary tape over the aisles off limits to the general public

The front end of Safeway #3154. This was the last day the store was in operation. 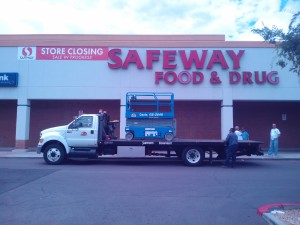 Another shot of Safeway #3154 with it’s “store closing” sign at the top.

Here in the Valley of the Sun, we probably have the most competitive retail market in the United States. With so many fish in the pond, you would think that all of these companies would bring their “A” game.Sometimes that’s just not the case. As a merchandiser, I go in to many stores here in the Phoenix area. I observe them on a day to day basis. I see the conditions in the stores, and I see how their associates act. As an employee of one of the biggest retailers, I have a means in which to compare what I feel is a good example of retailing as opposed to a bad example of retailing. When it comes to bad retailing, two companies in particular stand out in my mind. Actually, there are THREE companies that stand out my mind.They are Albertsons, Basha’s, and Safeway. Honestly, I can’t see how these companies are still in operation. Let’s be clear here, I’m not trying to wish anything bad on these companies. I know that the employees have families who are dependent on them. The problem is if your business model is archaic, your stores look antiquated, and your merchandising leaves much to be desired, you are basically screwed. Enclosed are a few prime examples to show firsthand what a lousy ineffective grocery store looks like. Who in their right mind builds an aisle AROUND an I beam? What about TWO I beams? 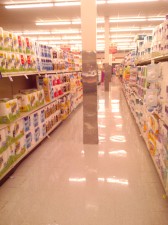 I’m sure you can figure out the company in the above pictures. Walking into this store, nothing pops..nothing “stands out.” All I see is stark white and BOORRIING….and where are the associates? I’ll have more examples..rather travesties..in the near future. 🙂

So the other day while I was working my second retail job which involves merchandising, I had to go to Fry’s #610…The Mercado..a former Smitty’s located at 43rd Avenue and McDowell. 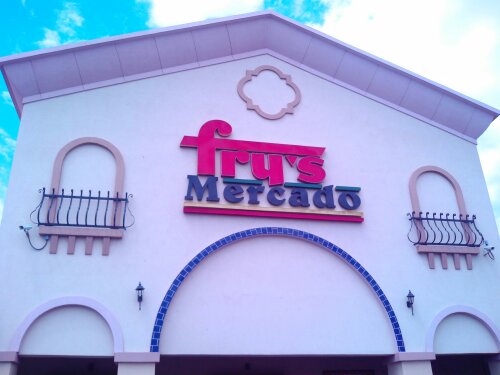 Since it was Thursday, I knew that I had a load waiting in the freezer in the back for me. I got to the back I realized that it wouldn’t be a small load and in fact it was on a pallet. Knowing that I would have to move the pallet in the freezer I grabbed a nearby manual pallet jack. At the bottom of the handle..at most grocery stores.. The store number is spray painted on the jack. In this case though the store number wasn’t #610, instead it was #49.. As in Fry’s #49.

Fry’s #49 was located out in Buckeye and probably 20 years ago as a cashier, I could always pick up hours at that store either working as a cashier or helping out their night crew. This was when fry’s actually would give you overtime and you looked forward to working overtime. I remember it being a fairly busy store at the time I was going out there to work. In fact there weren’t many grocery stores in the Buckeye area either. Well not too long ago they closed down Fry’s #49. I don’t know what the reasoning was for doing it. I do know that now there are at least two or three other Fry’s stores located nearby.

Anyway that was just a little bit of nostalgia from my brain.. Thoughts that make you realize how many years you’ve spent in this business and how many things have happened in those many years.. Comment if you like… enjoy… 🙂

Here in Phoenix the grocery industry goes back well over 50 years..the modern era anyway. Being in the southwest the types of buildings erected here have been directly and indirectly influenced by the  location and era (time). Though many stores and their locations have changed with the times and Phoenix’s growing population…some unfortunately have not. A prime example of this is Safeway #
END_OF_DOCUMENT_TOKEN_TO_BE_REPLACED

Alright, so I figure everything I say on here is going to be off the cuff or on the fly..in general spontaneous. Some things I say or post may “not be approved of” by the powers that be (and there’s a few of them…trust me.) but we’ll cross that bridge when we get to it. Hopefully I’ll be more consistent with this blog than I was with my other ones. My primary job is with a division of a  national grocery chain located in the Southwestern United States.  My secondary job is working as a merchandiser for a company that does business with my main employer and every other retail chain in the area. Because of this I see the many sides of this industry. Good AND bad. Anyhow, give me some feedback…and Thanks… 🙂